Brothers and Sisters All 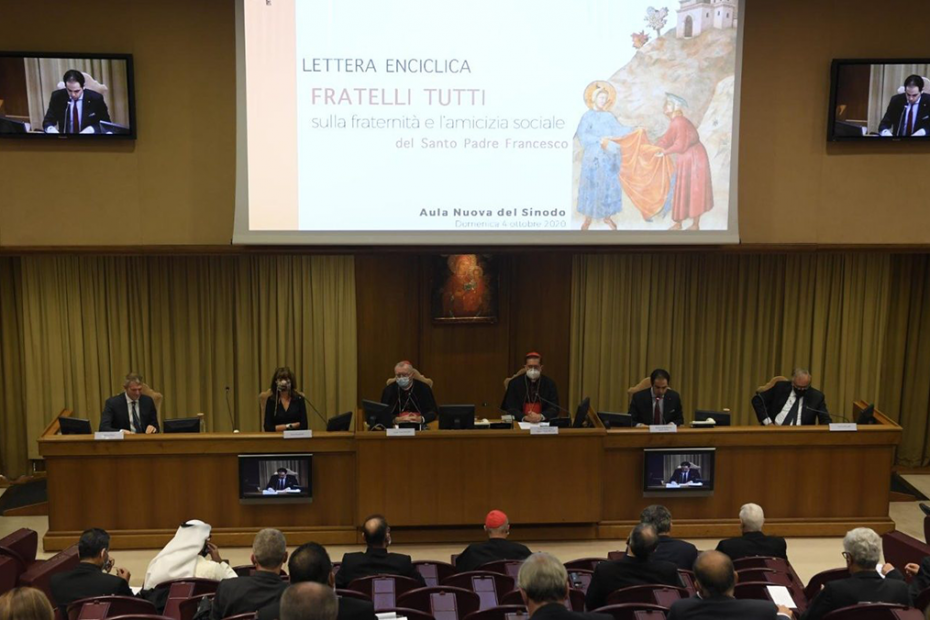 Pope Francis’ new encyclical Fratelli Tutti: On Fraternity and Social Friendship, issues a strong challenge to xenophobia and an exaggerated focus on national self-interest. It encourages social and economic inclusion at all levels and stresses that all human beings are sisters and brothers, members of one human family. This is a timely message for Australia.

Migration is a key issue in Fratelli Tutti. Pope Francis says that we are “obliged to respect the right of all individuals to find a place that meets their basic needs and those of their families, and where they can find personal fulfillment” (n 129). He sets out a range of ‘indispensable steps’ needed in response to people who are fleeing and they contrast with the current approach of the Australian Government (n 130). They include for example:

Pope Francis also affirms that people should not have to migrate. Wealthy countries like Australia could do more through international development aid to ensure that the conditions for a dignified life and integral human development are met so that people do not have to leave home. We could also be better hosts to people on temporary visas in Australia who have lost employment but are not currently eligible for assistance. Surely we can care better for these sisters and brothers who have been contributing to our society and economy?

Pope Francis’ reflections on “the politics that we need” are clearly relevant in the Asia Pacific region and in our own country. He says:

“Lack of concern for the vulnerable can hide behind a populism that exploits them demagogically for its own purposes, or a liberalism that serves the economic interests of the powerful. In both cases, it becomes difficult to envisage an open world that makes room for everyone, including the most vulnerable, and shows respect for different cultures” (n 155).

Pope Francis says that in the present crisis, politics must not be secondary to the economy but rather rise to the challenge with a far-sighted, integral and interdisciplinary approach to handling different aspects of the crisis and a focus on the long-term common good (n 177). While this may not serve the short-term electoral purposes of political parties, it is what justice demands – piecemeal solutions, quick fixes will not do. Politics can and must be “something more noble than posturing, marketing and media spin” (n 197).

Pope Francis sees the financial crisis of 2007-8 as a missed opportunity to develop a new economy and encourages us to build back better after the pandemic. The Vatican’s COVID-19 Commission is providing thought leadership that the Australian Government would do well to consider. The stimulus needed now could be an opportunity to make a just carbon transition and to lift people relying on social welfare benefits out of poverty. We could be building more social housing.

We could also benefit from taking to heart Pope Francis’ call for the patient building of dialogue and friendship in society rather than parallel monologues and the social media pile-on culture. It was heartening to see the Australian Bishops’ Statement Making it Real: Genuine human encounter in our digital world quoted at n 205! We need spaces and processes in which we really listen to one another, accept differences and seek the truth together.

Fratelli Tutti’s reflections on truth, forgiveness and reconciliation hold important messages for our journey towards a just relationship with First Nations people and communities. For instance, Pope Francis says that “we can never move forward without remembering the past; we do not progress without an honest and unclouded memory” (n 249) and that we cannot demand a “sort of social forgiveness” of those who “have endured much unjust and cruel suffering” (n 246). It will be important for the Catholic community to listen carefully to how Aboriginal and Torres Strait Islander Catholics respond to the encyclical.

Pope Francis had already made an important contribution to the development of Catholic teaching in clearly ruling out the legitimacy of the death penalty in any circumstances, and some hoped that Fratelli Tutti would rescind the use of the traditional just war criteria. It is very clear that Pope Francis does not consider war to ever be a solution. He says:

“We can no longer think of war as a solution, because its risks will probably always be greater than its supposed benefits. In view of this, it is very difficult nowadays to invoke the rational criteria elaborated in earlier centuries to speak of the possibility of a ‘just war’. Never again war!”

His concern is less about the just war theory and more about the victims of war:

“Let us not remain mired in theoretical discussions, but touch the wounded flesh of the victims. Let us look once more at all those civilians whose killing was considered ‘collateral damage’. Let us ask the victims themselves. Let us think of the refugees and displaced, those who suffered the effects of atomic radiation or chemical attacks, the mothers who lost their children, and the boys and girls maimed or deprived of their childhood. Let us hear the true stories of these victims of violence, look at reality through their eyes, and listen with an open heart to the stories they tell. In this way we will be able to grasp the abyss of evil at the heart of war. Nor will it trouble us to be deemed naïve for choosing peace” (n 261).

At the heart of Pope Francis’ commitment to social friendship and the dignity of every person is his belief in one human family. We are all children of God regardless of our beliefs. This encyclical challenges Christians to work actively for the rights of other believers who are minorities in Australia, just as Christians ask that our freedom and rights be respected in places where we are a minority. It invites all believers to return to our sources and concentrate on what is essential – worship of God and love for our neighbour. It is a timely message when so much in popular culture encourages us to make ‘gods’ of possessions or celebrity and to think only of ourselves.

You can access the full text of Fratelli Tutti here.

You can read an initial response to the encyclical from Archbishop Mark Coleridge, President of the Australian Catholic Bishops’ Conference and access social media graphics here.

Highlights from the launch of the encyclical can be viewed here.

Download an infographic on the encyclical from the Dicastery for the Promotion of Integral Human Development here.