The Season of Creation Comes Alive in Adelaide 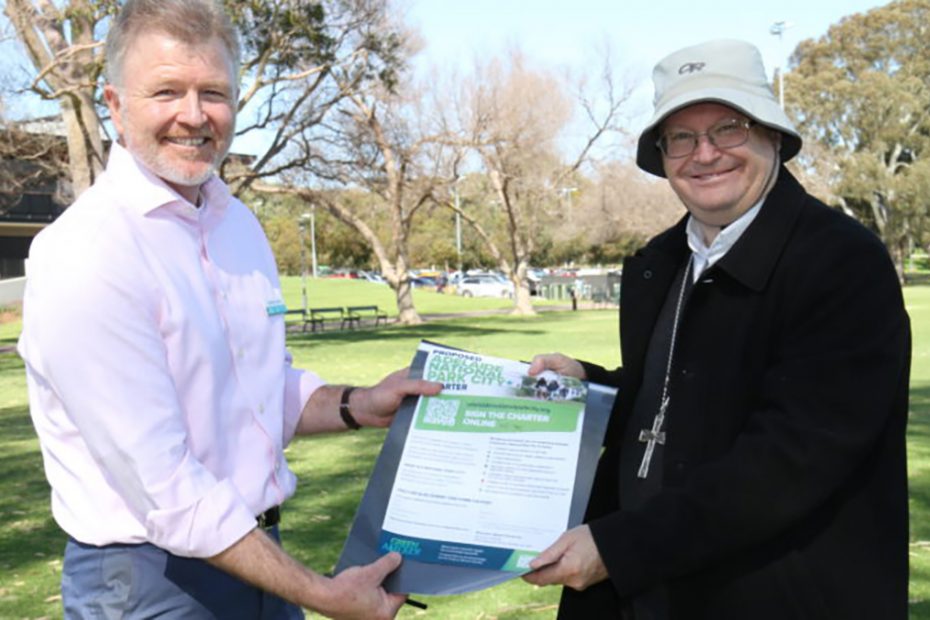 Peter Laffan, a member of the Archdiocese of Adelaide’s Council for Integral Ecology writes of the celebrations of Season of Creation examining its theme: “Earth as God’s Home for All – Hospitality and Habit”

The Adelaide Archdiocese, through the Council for Integral Ecology, is making its commitment to the Season of Creation evident with several events this month. A very successful launch on the first of September, in Adelaide parklands, on Kaurna Country, saw Archbishop Pat O’Regan sign the “National Park City Charter”, joining his voice to thousands of others backing the push for deepening connections between Adelaide’s inhabitants and our natural surroundings.

Along with NATSICC Chair John Lochowiak, State Government representatives, speakers from the Conservation Council of South Australia, Vinnies Refugee and Asylum Seeker Service and Welcoming Australia, spelt out what’s involved in this year’s theme of Earth as God’s Home for All – Hospitality and Habitat. Archbishop Pat stressed how listening to the voices of those speaking for the marginalised and the voiceless can shift our consciousness and take us further on the journey of ecological conversion.

The following week a forum on the theme was held in Glenelg Parish, expanding on the theme. Fr Michael Trainor from ACU drew out how Luke’s Gospel and Acts see Christ’s coming as woven in with a backdrop of Earth’s participation in the Paschal Mystery. Again Vinnies encouraged those present to join in the 150 Days of Action for asylum seekers and refugees. Sally Shaw, the South Australian Director of A Rocha, an international Christian conservation organisation, spoke of the crucial place of habitat in protecting biodiversity. It was encouraging to hear how the Eco-Church movement is taking off in the UK, as well as the hands on care of wetlands south of Adelaide enabling people to reconnect with nature in the nitty gritty.

Ron Knolder, from Glenelg Social Justice group, impressed with stories of the group’s incredible fund-raising activities for Circles of Friends, its welcoming of people with mental health challenges, and its devotion to taking parish elders on day trips to the country. A reminder of how Catholic parishes have served the neediest for generations, with little fanfare.

We’re looking forward to concluding our Season celebrations on Sunday 26th, Migrant and Refugee Sunday, with Prayer in Creation – For Hospitality and Habitat. Belair National Park, on the city’s edge, has a Mercy Grove that the local parish has been tending and using for a number of years. We will be bringing our heartfelt prayer for hospitality for the rejected and habitat for ourselves and fellow creatures to the beautiful setting.

It has also been encouraging to see Jesuit parish St Ignatius has a number of Season events, concluding with a blessing of the animals on 3rd October at a local park.